I discovered who my local prolific serenader is. Of course the Oracle knew already.

There are robins.  Everywhere.  When I wake, early with the sun, I hear them over the street sounds of Broadway.  When I walk along the path of Riverside Park they stop in front of me, deliberately, waiting to look me in the eye before I’m allowed to continue on my way.  Even as I pass dozens all over the grasses on either side of the path, I hear others singing in the surrounding trees.

My daughter suspects a nest in a nearby window to her apartment—she sends a text with a recording—“day and night,” she says. 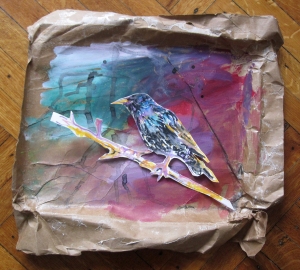 As she sits by her window working from home, she tells me she sees starlings on the window ledge across the street—“they leap off and let themselves fall a few feet before opening their wings”—we both wonder if this is normal.

I hear a whistle and turn to look—two starlings take off right in front of me and fly towards the river.  I see a fledgling by the park wall.  The only thing it moves as I approach cautiously is its head—with the bright yellow beak against the grey feathers, it too must be a starling—can it fly?—where are its parents?  I snap a photo and walk on.  When I pass the same spot, returning home, it is gone. 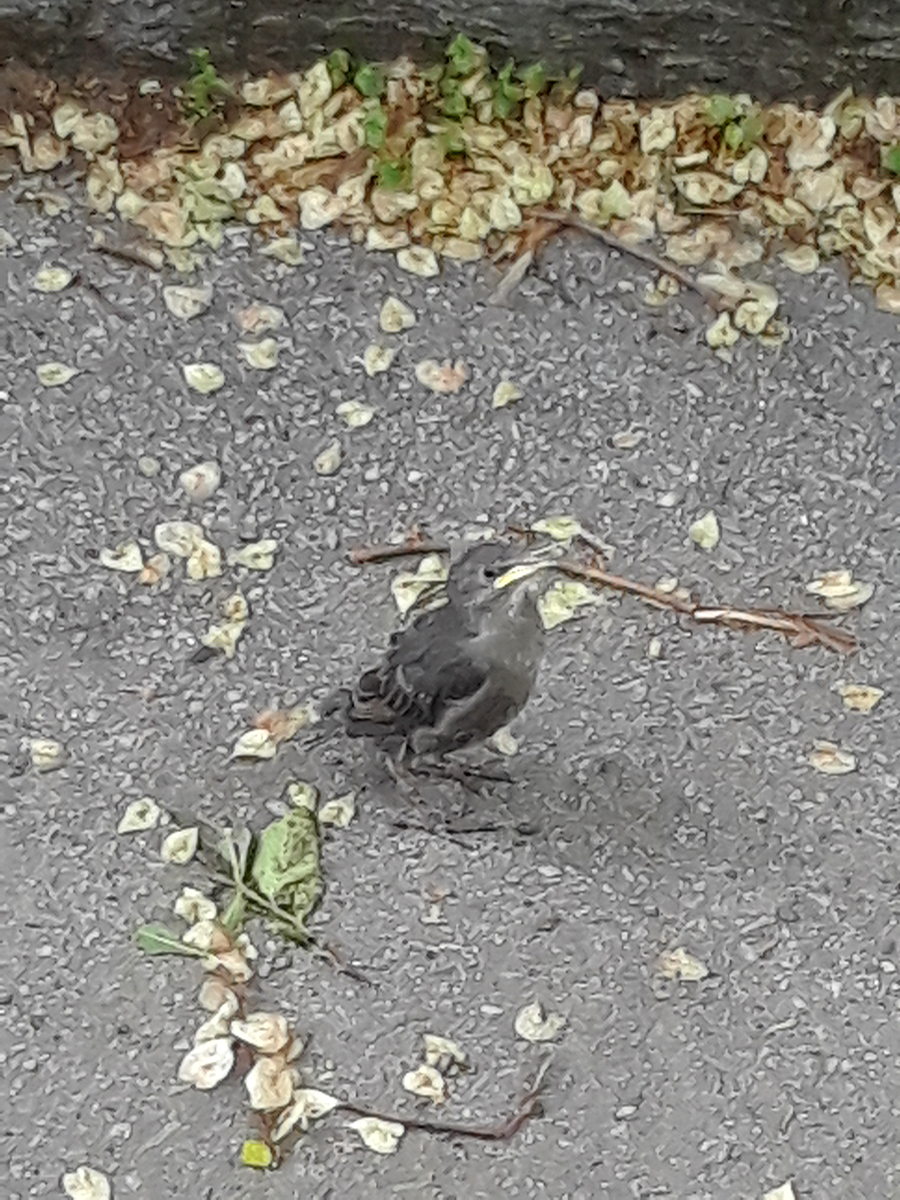 In the mornings the gulls swoop in groups, weaving patterns around the piece of moon that still sits ghostly in the blueing sky.  They cry like cats suspended in mid-air, echoing off the buildings into my window.

A mockingbird moves just ahead of me as I cross the bridge to the park.  It never stops singing, going through its repertoire while waiting for me to almost catch up as it hurries ahead again.  Another day, I am walking uptown instead of down, and a mockingbird lands on the iron fence just ahead of me.  It too is deliberate in meeting my gaze, making sure I stop, nod my head in greeting.  Further on a catbird does exactly the same thing.  A cardinal swoops down into the grass by a nearby tree, a flash of red that pauses with me before it returns to the top of the tree.  I hear more cardinals, blue jays and flickers. Sparrows chatter and cover the grass and path, the bushes and trees; pigeons share the stone walkway, and once, also, a morning dove.  Sometimes the pigeons visit my window ledge.

And crow.  Crow has been following me around for years.  Now he teases me, calling, in front, behind, from nowhere and everywhere.  Every once in awhile I am the winner in this game of hide and seek, but I know it’s only because he wants me to see him, to acknowledge his appearance as well as his voice.  A murder of crows appears ahead of me on one of my earliest walks, when I was still fearful of going out at all.

I’ve always walked, never having owned a car.  But it was with a purpose, to get from one placed to another.  Now I just walk.  And I have always been aware of birds while walking. But since the lockdown they seem to be multiplying by the day, boldly communicating—something, what?

Many of the world’s cultures see birds as mediators, messengers between the human and the divine.  I know what crow is telling me.  He knows I need reminding of it, too:  pay attention.  Get out of that inner conversation you keep having with yourself and look around, listen, be where you are.  Robins are symbols everywhere of new beginnings, transformation, tenacity, hope.  Birds show us the power of community, the power of voices, the symbiotic relationship between the earth and all living creatures.

These are the days of Covid-19 in the city of New York.  Humans are hiding; birds are out in force.

In fairy tales, those who understand the language of birds have magical powers.

days
collapse expand
places of between

between
material spiritual
no time exists

wings
open to
carry us home

I’ve been doing Draw-a-Bird Day on the 8th of the month for a few years now at MethodTwoMadness, accumulating most of these illustrations in the process.

For the earthweal challenge Vast Particulars.